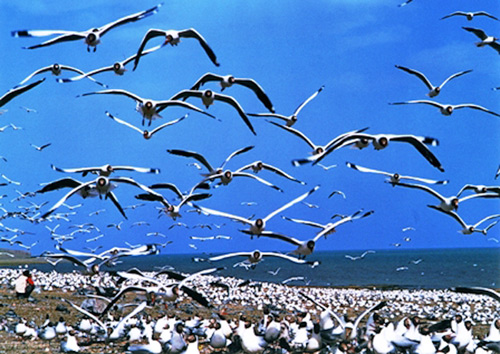 Birding in Qinghai, China, is a once-in-a-lifetime opportunity. The Yellow, Yangtze, and Mekong rivers all originate in this thinly inhabited province on the Tibetan Plateau. The Black-necked Crane, Tibetan Bunting, Tibetan Rosefinches, Tibetan Sandgrouse, Tibetan Babax, and Pink-tailed Bunting are among the 339 bird species found in the province.

If you are planning to go on a Qinghai birding tour, you need to visit these five locations mentioned below.

Sanjiangyuan, amid the Qinghai-Tibet Plateau’s hinterland and the south of Qinghai province, is an environment unlike any other. It is China’s largest natural reserve, covering 363,000 square kilometers and accounting for nearly 50.4 percent of the province of Qinghai. It is also the source of China’s Yangtze, Yellow, and Lancang rivers. It has the typical alpine ecology and biodiversity that can be found across the Qinghai-Tibet Plateau. This region’s vegetation, fauna, and wetland environment are all distinct, and its natural ecosystem has not been altered.

Sanjiangyuan is home to 85 mammalian species, 237 bird species, and 48 amphibian species in total. Tibetan Antelope, Tibetan Wild Ass, Leopard, White-lipped Deer, Golden Eagle, and Bearded Vulture are among the 16 animals protected by national law. There are also 53 national protected species, including the Argali, Sumatran Serow, Asiatic Black Bear, Himalayan Brown Bear, Saker Falcon, and others. Steppe Polecat, Yellow Weasel, Ruddy Shelduck, and other species are among the 32 provincially protected species. Sanjiangyuan is the best place for naturalists wishing to see a variety of China’s most sought animal species.

The beautiful Kunlun Mountain Ranges include E La Mountain as a sub-branch. The roadway climbs to approximately 4,500 meters at the pass, where it is surrounded by snow-capped peaks that sweep to the horizon. The Tibetan Sandgrouse and Tibetan Rosefinch can be found here. Other birds such as the White-winged Redstart, Tibetan Lark, Black-winged Snowfinch, Rufous-necked Snowfinch, Black-headed Mountain Finch, and others can be found in this area.

Huzhu Beishan is a geopark located on the eastern edge of the Qilian Mountain. The Blue Eared Pheasant and the Chinese Grouse are two outstanding Chinese indigenous bird species that feed in the early morning on the openings along the forest edge. Other exotic birds found in the lower forest area are the Crested Tit Warbler, Chestnut Thrush, Common Rosefinch, Goldcrest, White-winged Grosbeak, Chinese Leaf Warbler, and others. On the cliffs and amid rock crags, you might see Wallcreeper and Eurasian Eagle-Owl. It’s also a good idea to look for White-throated Dipper, White-capped Water Redstart, Plumbeous Water Redstart, and other water birds in the creek near the bottom of the mountain.

Now you know the must visit locations on Qinghai, you can also consider going on Yunnan birding tours. Contact Alpinebirding for consultation.