Recent
Home Health Schizophrenia: signs and treatment. It is important to know every aspect beforehand 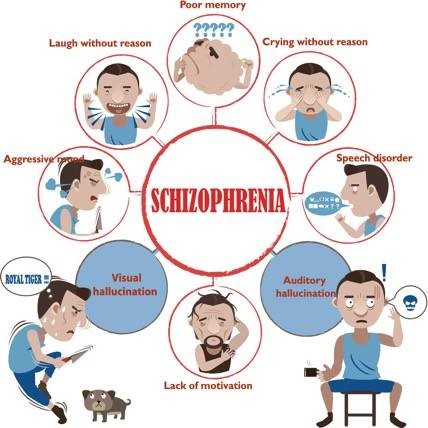 Schizophrenia: signs and treatment. It is important to know every aspect beforehand

Schizophrenia is a mental illness that can show up in very different ways. It is serious, but in many cases, it is easy to treat. It influences thinking, perception, action, and feelings. Those affected perceive reality in a different way. There are a variety of possible symptoms. In acute phases, some patients hear voices, develop delusions, or perceive their own thoughts as alien. The idea that those affected have a split personality is wrong.

Schizophrenia is common worldwide. They occur in poor, and rich countries, and different cultures. The risk of developing schizophrenia once in a lifetime is around one percent. The disease can occur at any age, most often it begins in early adulthood before the age of 35. But, before that, we need to understand the Schizophrenia diagnostic criteria. Schizophrenia can take different forms. As a rule, schizophrenia is treated with medication and psychotherapy.

Schizophrenia may appear before an acute phase begins. The symptoms in this preliminary stage are often non-specific. Therefore, they are not always associated with schizophrenia. Possible early symptoms include –

The symptoms mentioned can also have other causes. Experts believe that starting therapy early improves the prognosis of schizophrenia. Therefore, early detection centers were created. The offers are aimed in particular at young adults. Anyone who notices changes in themselves, such as problems with concentration, sudden mistrust of other people or uncanny perceptions can get advice and examination from specialists there. The Schizophrenia medication cost is affordable, but it will cost you expensive in the long run. A comparison of medication costs need to address the costs of all antipsychotics.

Symptoms: Other possible signs of schizophrenia

The following symptoms can indicate schizophrenia – but need not. Other diseases can also be considered as the cause. Based on these below individual symptoms, Schizophrenia diagnostic criteria is done. Individual symptoms sometimes show up in healthy people, without the need for therapy –

Statistically, people with schizophrenia are more likely to suffer from other mental illnesses such as depression, and alcohol or drug addiction. The risk of some physical diseases such as diabetes or cardiovascular diseases is also increased, as is the risk of suicide. The signs described need not all be present in schizophrenia. They can vary in the course of the disease, and also from patient to patient. Based on these Schizophrenia diagnostic criteria, a conclusion is set, and treatment is done.