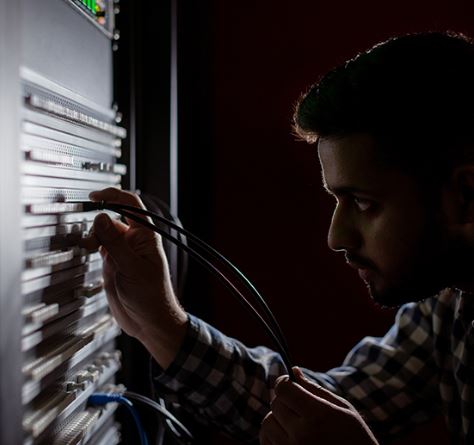 Save yourself from power surges by regular UPS maintenance

By definition, all UPS users appreciate the disastrous consequences of a blackout, but not all realise that power surges and other aberrations pose an even greater risk. Not only do they cause outages but often damage the hardware itself, preventing you from getting back online indefinitely. When the UPS is protecting hard drives, the potential consequences of an uncontrolled power surge are painful to contemplate. If the UPS itself is taken down, getting back online usually entails a lot more than flipping a breaker.

Most UPS are protected against most power anomalies but only within limits. For complete protection of the UPS itself and downline equipment, regular UPS maintenance is essential. As well as blackouts and surges, there are many other kinds of power irregularities and all of them can fry your electronics or degrade key components, such as batteries and capacitors, shortening their lifespan and increasing long-term UPS maintenance costs.

The IEEE defines numerous kinds of threatening power anomalies in “IEEE Recommended Practice for Monitoring Electrical Power Quality” (1159-1995). It is worth familiarising yourself with all of them so that you can choose appropriate protective equipment and add them to your maintenance routines. The following paragraphs provide only a very brief introduction to the subject.

A surge is defined as a very brief rise in voltage. Surges are not rare; they are a daily event. Simple equipment switching events, electrostatic discharges and nearby thunderstorms can all be responsible. During a surge, the line voltage sometimes rises into the thousands of volts but it is both their intensity and frequency that can have damaging consequences. Less intense over-voltages that persist longer are called “swells”. Abrupt load reductions are often the cause but they also frequently arise from single-phase faults on three-phase systems.

The opposite of surges and swells are sags and brownouts. Momentary sags are often generated by the start-up of nearby equipment or by utility switching (such as air conditioning systems). However, the equipment responsible for the sag is often not even in the same building – neighbours drawing power from the same sub-station are sometimes the root cause.

Unfortunately, a lot of equipment powers down or goes into standby as a result of sags but usually, your intervening UPS provides a good degree of protection providing it is properly calibrated. In particular, line-interactive UPS systems auto-adjust their output voltage to compensate for low input without having to fall back on their batteries. Additional solutions can include power line conditioners and Ferro-resonant control transformers. Another possible solution, if it is feasible, is to divide your loads between more circuits.

Radio frequency interference (RFI) and electromagnetic interference (EMI) frequently induce noise between the live and neutral conductors. Although low in intensity, it can trick electronic systems into misbehaving. Although rarer, it is also possible for electrical noise to arise between the earth and live/neutral conductors. In big power consumers such as hospitals, noise between neutral and ground can pass through to the load even when neutral and earth are tied together at the distribution board. For any kind of noise, the range of possible solutions includes installing noise filters, surge suppressors or moving to an online double conversion UPS.

Frequency variations are unusual except when you depend on a generator (as the load increases the motor can slow, deflecting the output from the normal 50Hz). Other kinds of waveform anomaly are more common, however, and can take several forms, including harmonic oscillations, inter-harmonics, notching and DC offsets – all with different causes and consequences for your equipment. Three-phase and switch-mode power supplies suffer most from waveform problems and they can burn out components, disrupt hard disks, overheat transformers, disrupt timers and trip circuit breakers. Assessing waveform anomalies, and their significance requires a professional engineer and professional equipment. Solutions can include line reactors and chokes.

A UPS service is an opportunity to look for evidence of hidden problems. Frequent power irregularities that don’t actually shut down your systems are nevertheless damaging your equipment without being noticed. Long-term professional monitoring helps to identify what power incidents are occurring and determine their origin. Today’s UPS are robust but sometimes a little additional protection provides an excellent long-term ROI.