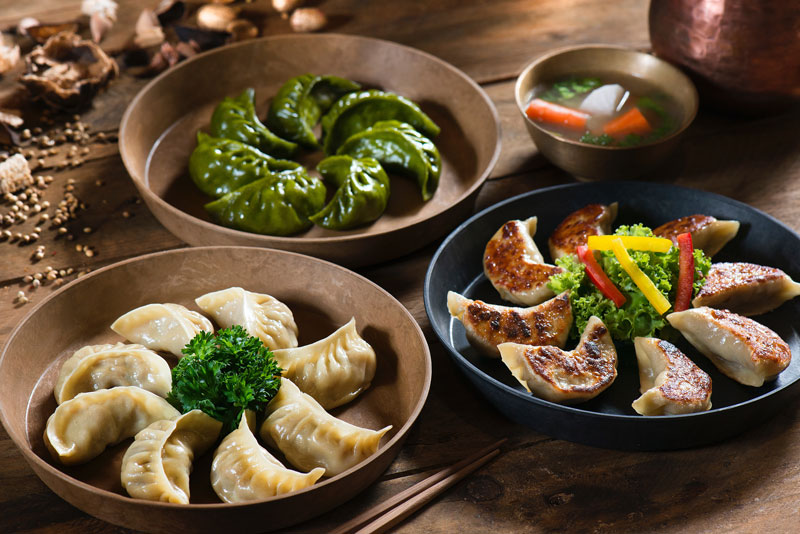 The traditional cuisine of Bhutan is a delectable fare of vegetarian and non-vegetarian dishes generously spiced up with green or dry chilies and flavored with a dash of cheese.

The daily meal is not only nourishing but also quite hearty, most suitable for the high-altitude living conditions.  Staple foods such as the red rice, buckwheat, and maize are grown locally and so are the vegetables and fruits.

Meat variants include beef, pork, chicken and yak. In addition to sumptuous recipes churned out using these native ingredients, travelers can also have their fill of Chinese, Tibetan, Indian and Nepali dishes that are also widely available.

This rice is somewhat similar to the brown rice varieties available in other parts of the world, but has a distinct earthy taste. Cultivated in the farmlands of the Paro Valley,  the rice is soft, unpolished and rich in minerals as the waters of the Paro River used to irrigate the land is fed by glacial melt.  Waters from melting glaciers travel through the mountainous landscape absorbing a host of minerals and nutrients by the time they run down to the valley. The soft textured whole grain is reportedly rich in potassium and magnesium. 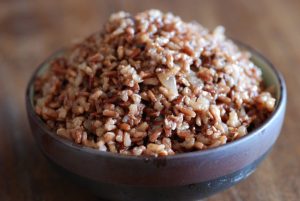 Red rice paired with vegetable or meat-based side dishes forms the regular diet of the local people.  You really can’t miss this staple. The rice tastes delicious even if simply cooked up with mushrooms and herbs.

Special Bhutan Tour Packages are available to explore Paro valley and other villages where farming is undertaken. You could get accommodated in homestays and spend time with farmers getting to know the local lifestyle better.

This “National Dish” of Bhutan is a rich and spicy affair. Green chillies split lengthwise simmered with Datshi (cheese), tomatoes and onions make a delicious concoction that goes well with the red or white rice.  Ema Datshi is an integral part of every meal in the country.  The consistency of this recipe however tends to vary across the different parts of Bhutan, with absolutely no compromises on the taste!

Ideally, soft cheese made from the milk of cows, goats or yaks is used for cooking purposes. Typically a major portion of the milk collected is converted into cheese or butter. In addition to Ema Datshi, there are varieties of cheese-based dishes that find a place in regular meals.

Shamu Datshi, a lip-smacking cheese and mushroom preparation is a delight if you love mushrooms. While potatoes are delicious irrespective of the dish they are used in, they get especially yummy when cooked with cheese to create Khewa Datshi. Some of the variations also feature asparagus and spinach. 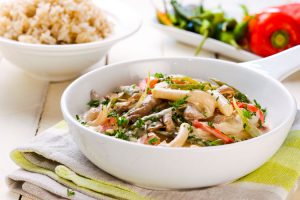 There’s little or no escape from chili or cheese when indulging in local Bhutanese cuisine. Most restaurants though factor-in the traveler’s sensitivity to spices when preparing food.

In addition to the soft cheese, dry/hardened Yak cheese is a local specialty. The slow dissolving Chogo cubes make an interesting snack between meals, especially when you are traveling.

Locals have mastered the technique of preserving meat. Dried/preserved meat serves as an excellent source of protein, especially during the cold winter months. Shakam or dried beef is widely used in Bhutanese cuisine in addition sun-dried pork (Sicaam) as well as Yak meat, characteristic of this region.

Meat lovers are bound to appreciate the Shakam Datshi, a dish made using dried beef and cheese. The Shakam Paa is yet another popular stew/gravy made using ground beef and spiced up with red chilies. You can also find a few vegetables such as turnips and radishes in the dish. 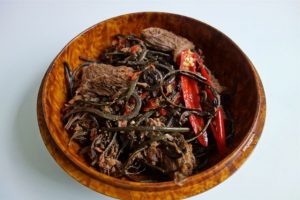 If you relish pork, then the spicy Phaksha Paa is bound to appeal to your taste. Stir-fried pork added to radishes/spinach cooked with red chilies in butter or oil makes a great side dish with the native rice varieties. The recipe may also be made from Sicaam (dried pork).

Tangy and fiery Jasha Maru is definitely a must-taste if you love chicken dishes. Apart from the usual chili onion and tomato, generous amounts of ginger and garlic are cooked up with minced chicken.  Though served with rice, the Jasha Maru is known to be the spiciest of the local fare.

Made from left-over vegetables and red rice, this simple combination is a quick and easy way to churn out meals without wasting food.

Dumplings also form a key part of the local cuisine, proving to be a healthy snack between meals or at times even replacing meals.  They regularly figure in special meals during important events and occasions.

Momos, filled with different varieties of meat or vegetables and served with chili sauce or ezay make a hearty meal.  The local variant of Momos, the Hoentays are equally delicious and hearty but taste different as the filling is encased in buckwheat dough.

Next, to red rice, buckwheat and maize are a part of the regular diet in different parts of the country. Apart from Hoentays, buckwheat is also used to prepare pancakes (Khur-le) and noodles (Puta).  Served along with the spicy side dishes, pancakes and noodles can prove quite filling when had for breakfast, offering much-needed energy at the start of the day. Noodles tossed with delectable mountain vegetables too are quite popular.

Butter Tea or Suja made from Yak butter is a native specialty.  Black tea and tea with milk are also taken. Ara is the local wine prepared from fermented rice/millets.

Notably, local cuisine does not have any desserts other than fruits.

Foodies must opt for one of the Food or Cuisine themed Bhutan Tour Packages to fully indulge in and appreciate the authentic local cuisine of Bhutan.