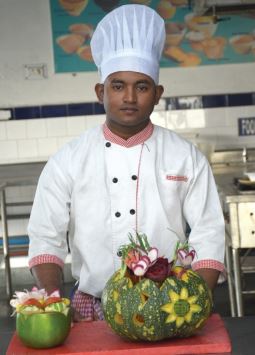 Kitchen Hierarchy – Different Chef Titles you need to be aware of

Are you someone who has a keen interest in culinary arts and dream to make it big someday? Pursuing a hotel management degree from a top management college in India will be a great way to begin your career in the food industry as a chef. Though formal training is not a job requirement for chefs, it is essential if you are keen on making a mark in this field.

From institutional kitchen to a fine-dining restaurant, chefs play their role in a commercial kitchen according to a strict hierarchy. Assignments and responsibilities differ based on the precise needs of a given kitchen to ensure it runs smoothly every day. Each position in the kitchen hierarchy holds an important role in the overall function of the kitchen. In this blog, we’ll discuss the rules and ranks of a commercial kitchen that you need to be aware of to decide whether it’s the right path for you. Let’s start from the top of the hierarchy and work our way down the chain:

On top of the kitchen hierarchy sits Executive Chef whose role is more a managerial or business-orientated position. She/he is the overall kitchen boss who is a senior chef progressed with the responsibility of handling the administrative side of the kitchen. He usually doesn’t have a lot to do with the daily running of the kitchen itself but overseeing the overall operations of the business to ensure the quality of the product meets expectations.

Sous Chef is the ‘second-in-command’ who acts as the liaison point between line chefs and the head chef. He also assigns schedules, oversees cleanliness and train the kitchen staff. He is much more involved in the day-to-day operations in the kitchen and can take over the in-kitchen duties of Head Chef in his absence.

chef de partie, station chef, is a chef in charge of a particular area of production in a restaurant. In large kitchens, each chef de partie might have several cooks or assistants. In most kitchens, however, the chef de partie is the only worker in that department

Most large kitchens have multiple Line cooks or demi Chef de Partie and each of them is responsible for one particular menu speciality in which he/she excels. Their duties are specific to the restaurant and the type of cuisine they serve. Positions like Sauté chef, Roast chef, Grill chef, Pantry Chef, Pastry Chef all come under Line Cook or Station Chef.

Commie chefs are the junior members of the kitchen who works under the Chef de Partie to learn the ins and outs of a specific station. They work as a helper under one of the line cooks. Students of a renowned hotel management institute in Durgapur get the opportunity to undergo industrial training and start their career as a commie chef in various star hotels all over India.