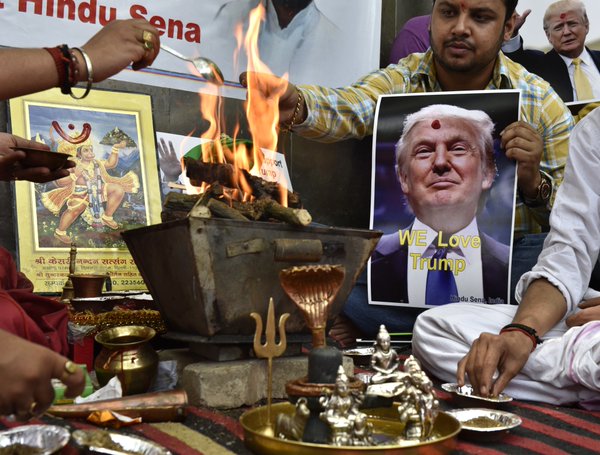 It seems, all anti Islam communities are seeing only hope  in Donald Trump only. That’s why they are doing whatever thy can to save the world form the attack of Islam.

Recently, a Hindu Group from India performed Hawan ( practice offered to Hindu Gods and Goddess ) to support Donald Trump for the president’s election 2014.

All members are from a Hindu origin party named Hindu Sena . They were performing their rituals at Jantar Mantar in New Delhi for seeking some super natural help to Trump. They had banners printed : ” We support Trump, He is hope against Islamic Terror”.

“We are praying to ask Gods to favour Trump in the election.”, said Vishnu Gupta, The president of Hindu Sena. According to Mr. Gupta, his group is supporting  Trump because they feel that Trump is the only person who can stop the terrorist activities being conducted by Muslims.

” Donald Trump is a brave heart guy. He is very much determined to destroy the Islamic terrorists.  He is a savior and only hope for mankind”. added Gupta.

Hindu Sena founed in 2011 By Vishnu Gupta. Recently this group was in news by banning a Pakistani singer’s concert in Mumbai.